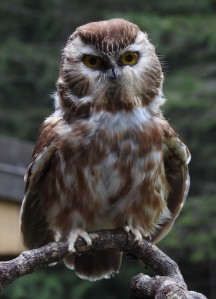 A Northern Saw-whet Owl at the Natural History Centre. Photo by Barb Biagi.

The Northern Saw-whet owl at the Natural History Centre was found by Sophie Courteau in the winter of 1995/96. He is a tiny owl with plenty of attitude: Saw-whet’s measure about 20 cm long with a short tail, large head, bright yellow eyes, dark bill, and reddish plumage with a white streaked front. These owls live in forests and wooded swamps. Although a highly common owl, Saw-whets are highly nocturnal and seldom seen. They hunt at night and eat small rodents, birds, and insects.

Saw-whet Owls make their homes in old woodpecker cavities (large chiseled-out holes) in trees. Their high-pitched call may sound like too-too-too. (To some this sounds like a truck backing up.) It can be heard in evergreen mountain forests from January through May. On migration they make a different note. When alarmed they make a raspy noise like a saw being sharpened.

Listen to the different vocalizations of the Northern Saw-whet Owl.

The Northern Saw-whet Owl is our Natural History Treasure of the Month for April 2015. 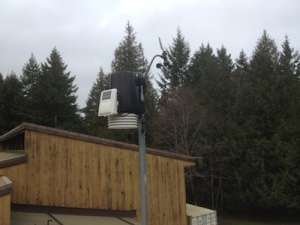