Students and Stewards on a fossil walk at the site of the Mosasaur discovery.

Each month this blog will be featuring a natural “treasure of the month”. The featured object for March is a mosasaur fossil that was found on Hornby Island. The mosasaur–an extinct marine mammal whose distant relatives are snakes and monitor lizards such as the Komodo Dragon–was discovered by Betty Franklin in 2004 while on a fossil walk with the Vancouver Island Paleontological Society. Prior to the find, Betty had been fossil hunting on Hornby for fifteen years.

Bones of vertebrates such as mosasaurs are a rare find on Hornby Island. During the last 20 million years of the Cretaceous Period, mosasaurs were the dominant marine predators. Their elongated body was streamlined for swimming. Their broad tails supplied the locomotive power as they patrolled the water off of North America’s coast looking for fish, ammonite, and other mosasaurs to dine on.

When Betty first spotted some bonelike material in the rocks, she could hardly believe it. But upon taking a closer look, she realized it was three large vertebrae. Her initial skepticism turned to excitement. As Betty explains:

The rest of the group arrived and in no time we have uncovered a series of concretions: 36” of the spinal column with eight vertebrae exposed and four more embedded, three ribs and some miscellaneous other bone material. 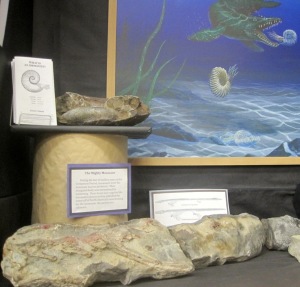 Our featured treasure for the month of March: A mosasaur fossil located at the entrance of the Natural History Centre.

The fossil was identified as a Platecarpus or Tylosaurus, and there has been some speculation that it is a new species of mosasaur. Today, the fossil is located in the Natural History Centre next to ammonite fossils and underneath a large painting of a mosasaur by Dan Bowen, who was also on the walk the day of the exciting discovery.